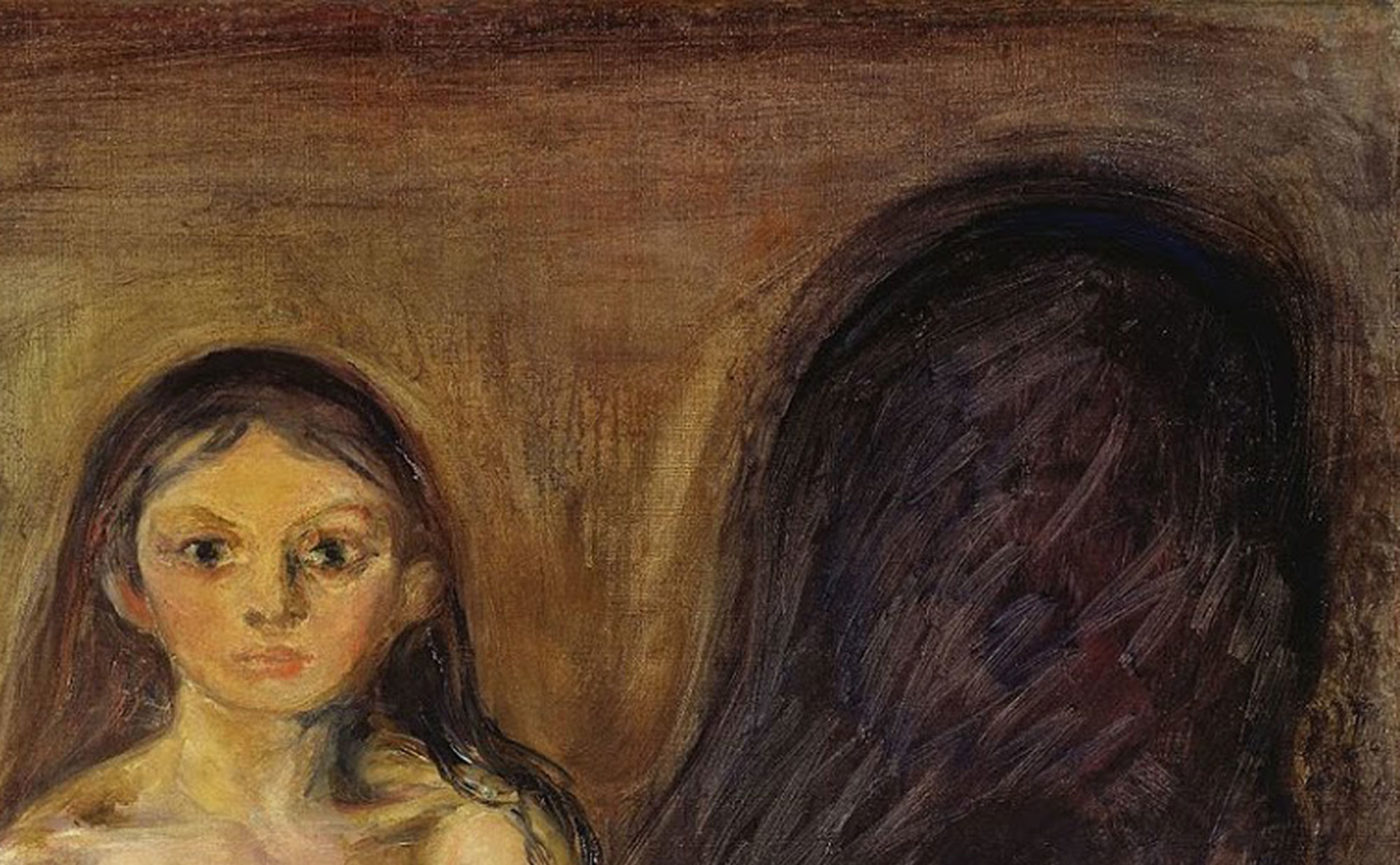 The works of Edward Munch (1863-1944) have fascinated me more and more over the years. In Puberty of 1894-95, certain formal and perspective distortions typical of his mature language, to which this painting belongs, are not present. This work has a more intimate or apparently less explosive character than his other more violent and strident works, both in terms of colour and formal forcing. The explosiveness of this painting resides in different characteristics, which, given the theme of titling, has prompted the author to take a different path, deeply consistent with his language, but that departs from that dynamism extrinsic in the escape of the infinite and dizzying streets or / and in the palette noisy and contrasted that even when it represents scenes of greater stasis gives the complex an energetic animation of the events shown, whether they are indoors or outdoors, or even just landscapes without the human presence. In Munch’s work, everything is alive and quivering.

In this work, on the other hand, a greater firmness seems to reign, the composition is made up of the bed placed horizontally, on which the figure rests at the centre of the scene in a vertical position, thus constituting a perfect central intersection of horizontal and vertical, the structure of immobility par excellence. Stasis replicated by the posture of the girl with her knees and narrow legs, on which she crosses her arms as if to close, not to show. The gaze is fixed, hypnotized or inanimate, also motionless like the figure, which seems to suggest more a mannequin than a human body. Such immobility is contrasted with the girl’s shadow with its diagonal and ascending momentum, a shadow that does not appear convincing, neither from the formal point of view, not presenting the characteristics of that body, nor from the dimensional point of view, appearing oversized. Its spectral mass looms over the girl, constituting the only dynamic motion placed to contrast and break the immobility of the rest of the composition. Munch gives form to something difficult to narrate through an image, the adolescence of a girl whose revolutionary movements, moral and hormonal, are totally internal. The frenetic and chaotic whirlwind of those inner movements is embodied by the monstrous shadow that rises from the immobility of the figure like a cry, like an inner ghost that could overwhelm the girl herself. That presence is a threat that dominates her and Munch, through the nervous and decomposed brushstrokes, assigns her a whirling and disturbing movement, is the only thing that moves in that image and does it like crazy. That monstrous presence is something that the painter knows well and that led his sister, barely twelve years old, to death from tuberculosis, a disease of which his mother died a few years before the young Johanne Sophie. What is truly surprising, and that makes this painting a masterpiece, is how Munch, just over thirty years old, was able to tell at the same time a personal story painful in a form that becomes however plural and universal in that typical condition shared by any girl who approaches adolescence with the psychological-hormonal burden that follows. Even the simple visual narration of such an event is no small thing, being an inner event, both in its adolescent passage, and in the pain resulting from the death of his beloved sister.

Therefore, the apparent static nature of this work is brought back, through the abominable spectral presence of shadow, to that anxious dynamism typical of its production. And, moreover, observing the chromatic mixture, we discover that it is dense with a gesture that stirs up every single fragment of the painting. The palette based on combinations of browns, and which could, precisely because of this chromatic proximity, enhance its stability, is shaken by the application that dirties and contaminates the individual areas of the work and for which each of them never appears to be constituted or dominated by a single colour. So, if on the one hand the typology of the chosen colours gives the complex a leaden and dirty atmosphere, on the other hand their application amplifies the “dirty and polluted” component, multiplying the chromatic nuances that, together with the gestures, give it that dynamism that has been taken away from the main compositional structure.

In every gesture, in every chromatic stain, is contained the drama of the biographical events of the author, who could not but paint what he was, but that through his expression gives body to the social drama of an entire age against which he hurled himself, even if he does so in a more declared way in other works than Puberty. And also for this reason, this work retains a more intimate character, making it seem even more extraordinary its universality. 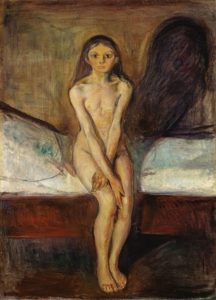