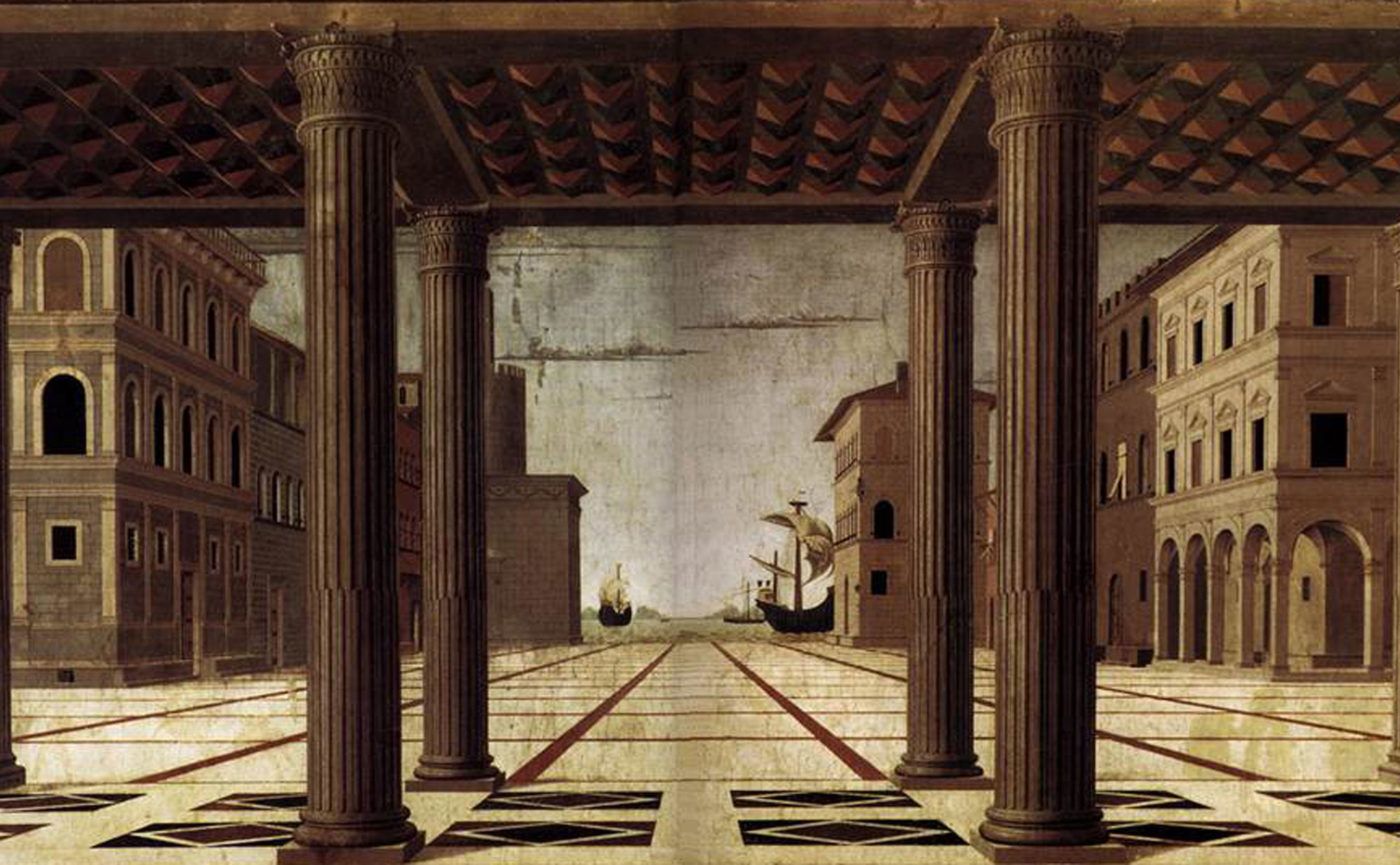 This, which I am presenting here, is the first in a series of interventions aimed at the dissemination of visual grammars. An aspect that, as I said in the introduction to the blog (https://www.danilosantinelli.it/danilos-blog/two-or-three-things-about-the-blog/), is closely linked to the analysis of the characteristic aspects of postmodernism, given the massive use of images and their wide dissemination implemented by postmodernism as a privileged linguistic vehicle and attributable to its characteristics of speed of unconscious penetration, which in the absence of an education in visual literacy proves even more functional. Thus, it harm the possibilities of conscious and democratic choice of individuals.

Visual texts are expressed through internal codes that determine their composition, shape and color, these codes are aimed at our way of seeing and thinking things. The images are designed on the basis of the knowledge of our visual and psychic system, therefore, to make a speech about the images assumes the basic principle that they are in no case reality, but instead address our way of perceiving, optically and mentally, reality. For this reason, images are so effective, they speak to our imaginary and our way of looking at the world, to the point of reproducing the distortions that our perceptual system applies to it.

Talking about realism in the expressive system of images is therefore misleading. Just think of what we consider to be one of the greatest examples of realistic representation, namely the mathematical perspective, for which two railway tracks that move away towards the horizon are shown as converging. Clearly the perspective is directed to our limited perceptual apparatus, which precisely sees the convergence of the two tracks, and not to the reality in which the two tracks could never converge without causing the derailment of the train. The reason why the perspective seems so realistic to us lies in the fact that it shows us things as we see them and not as they are actually in reality. We must then consider how it reproduces our perceptual defect by means of a monocular representation – an aspect in turn due to the technical limitations of the drawing – rather than in a binocular way by superimposing the vision of the same subject from two slightly different points of view, as happens instead in our perception of the world.

This aspect also includes the most recent photographic expression. Photography reproduces, in fact, the error of visual convergence of objects in the distance. Despite its apparent documentary tendency, it cannot ignore the subjective contribution that manifests itself every time the gaze, through the lens, imposes arbitrariness by fragmenting the subject under examination. The cut and the framing determine a completely subjective reading of the photographed object, showing us not how it looks, but how we are interpreting it and intend to show it to the viewer. An error that we also find reproduced in cinema (some film critics identified space-time realism as the revolutionary identity of the language of cinema, a realistic peak within a path that originated with Renaissance perspective painting). What about its dynamic aspect? It too is fictitious, suggested to our eyes by the twenty-four frames that follow one another in a second during film projection (the frames in analogue television reproduction become 25, while in HDTV systems they can reach 50 or 60 frames per second), but in reality, without our intervention as spectators, they would remain absolutely separate from each other.

Let’s still think about the sequencing proposed by the comic strip. Here, even the viewer gives temporal continuity to images that, on paper, appear evidently separated from the characteristic frames that constitute it. That white space that stands between one vignette and another is time, the time that elapses between the event represented in the previous vignette and the one represented in the next. But, in this case, time is not induced as in the cinema projection, it is determined instead as totally internal to the viewer, thus involving him in the narrative construction of the events and to which each of us can imprint a slightly different trend despite the graphic suggestions provided by the author.

Those who frequent comics know how certain types of representation, such as that of American superheroes or adventure of the Italian publisher Sergio Bonelli, are defined as realistic. A definition due to the perspective representation, which is accompanied by the use of an anatomy of type Michelangelo and modular nature, within which the characters are presented as perfectly symmetrical. A device that allows the cartoonist to reproduce and render the immediate recognizability of the characters presented hundreds of times in the pages of the album. Such modularity in reality is instead partially denied by our imperfect physicality, for which it is possible to have one limb slightly longer than the other, the shoulders not perfectly aligned and so on. Aspects that become more and more acute with age and the consequent postural defects. The modularity of the characters in the comics is similar to the perfection of the geometric modules. Their very graphic nature, which defines the characters through a black line of outline, is obviously unrealistic. It is precisely a graphic synthesis that allows the author a translation of the world in comic book language, but completely absent in the real world. Let’s leave out some obvious forcings and anatomical absurdities presented in the American superhero universe.

Each of the disciplines inherent to drawing: comics, illustration, painting, has a different approach to the anatomical translation of subjects and to the spatial translation of landscape, whether natural or architectural. If the traditional cartoonist acts geometrically in the spatial reproduction of the urban landscape with the help of ruler and square, in the case of the illustrator the perspective rendering becomes more intuitive, obtained by a freehand translation and within which the landscape and human subjects, with greater ease, tend to an obvious graphical or pictorial deformation. The illustration presents, in fact, infinite possibilities of technical and stylistic declinations of representation. For which it can range from the use of the graphic line, to that of collage, to that of the various pictorial materials, to the most recent digital techniques. And it is certainly not uncommon for techniques to overlap and for the stylistic alphabet to consist mainly of matter in a translation of subjects without a sign.

If we then examine the anatomical use made by painting, at least from that of the traditional area, we realize how modularity and regularity are an idealistic translation of formal harmony of Greek descent. Certainly in some authors this modularity becomes more evident and pushed, as in the case of Piero Della Francesca (1416-1492), where even the faces seem interchangeable and where the harmonic perfection of the mathematical form takes the upper hand over all other aspects. This is particularly present in the Renaissance production of central Italy, which tends to weaken or disappear in other areas, such as the Veneto or Lombardy: where, in the first, a pictorial-chromatic matterl takes over, made evident, for example, in the work of Titian (Titian Vecellio 1488/90-1576) or Tintoretto (Jacopo Robusti known as Tintoretto 1518/19-1594); and, in the second, the use of light, which amplifies the chiaroscuro aspects in Leonardo’s terms, where the volumes, rather than being exalted by the shadows, are permeated by them, giving the works an indefinite atmospheric evanescence and a greater temporal sensation, which then led, in the early seventeenth century, to the explosiveness of Caravaggio. This is certainly not an exhaustive discourse on the stylistic-pictorial traditions, but one that makes use of a few examples of their linguistic complexity. Moreover, the pictorial traditions have long ascendancies and multiple geographical origins. This aspect is due to the longevity of this artistic expression, which, as they say, dates back to the mists of time, coinciding with our own appearance on the planet.

We must therefore ask ourselves, finally, what are visual texts, having denied their identity in realistic terms, that is, subjects equivalent to windows overlooking the world. A visual text, in short, is the expressive tool with which an artist, belonging to one of the visual disciplines, proposes his interpretation of the world and the events inherent in it. But this expressiveness is not revealed through the painted subjects, or the subject of the cinematographic or comic strip narration, or, again, illustrative, it is revealed, instead, first of all, through the graphic and/or material means that the author has adopted; since a given sign, a given pictorial gesture, a given pictorial or photographic chromaticity (and in this case related to the type of framing), corresponds to an expressive rendering of the subjects. Therefore, even before the subjects, the instruments adopted according to their use become bearers of meaning. Visual grammar should therefore be understood in this sense, since it deals with the first linguistic aspects that allow an author to express himself and a viewer, or reader, to understand the language that is already a substantial part of the message.